Your monument shall be my gentle verse
That eyes not yet created shall o'er read
And tongues to be, your being, shall rehearse
When all the breathers of your world are dead
You still shall live, such virtue hath my pen
Where breath most breathes - in mouths of men
William Shakespeare (1564-1616)


Billett, son of Robert in my last post was variously described as a Yeoman, Writer, Book-keeper and Sheriffs Officer.  He is currently on my research list and more should be known in due course. He married Margaret Austin  at Cambridge in 1814.   Margaret would appear to have been born to James and Ann at Trinity, Ely in 1786.
It is unclear whether they had 1 Lynn Road in Ely (opposite the Lamb Hotel) built in 1837 or simply had it altered because of road widening works (there are deeds at the CRO remaining to be investigated on this) but certainly they owned it and this was where they lived.  Below is the house in later years with Billett jnr standing in the doorway. 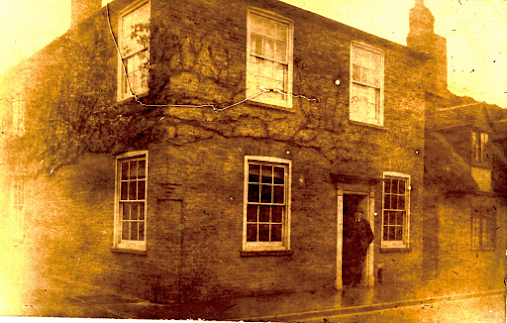 Margaret Genn had died as early as 1837, it is unclear why.  She was stated to be 50.  Billett died in 1872 and has a headstone in St Mary's graveyard.  The couple had five children of only two lived to marry viz

James Japhet - Little is known to me.   Robert Seymour Genn knew very little but had corresponded with a descendant.  He thought that there were few descendants but this seems unlikely from what I have discovered. James was reputedly a Tailor  and married Elizabeth Noakes at Dover in 1850 and moved to Kent.  It is unclear exactly what was happening, but James certainly died in the 1850s, supposedly of tuberculosis.   I cannot find a registered death, nor what happened to Elizabeth. They only had one child that I know of, a son James Billett, who married Eliza Potter in 1883 and had the children shown below.  I also attach a rudimentary note of what I now happened subsequently.  I would expect quite a number of descendants

Billett - The second of that name.  Had a remarkable life - see post of
Posted by Michael Taylor at 11:35 No comments:

Robert Genn (son of Richard in my post of 9th March 2013) became a fairly prominent Ely figure.  He was admitted to the King's School in Ely in 1771 (at the age of 11) as a Cathedral Chorister and remained as a chorister in the Cathedral Choir until the age of 36. 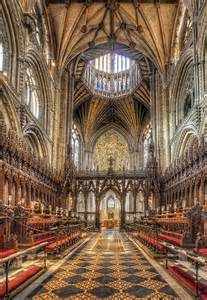 He married Ann Reynolds, widow of William Reynolds (proprietor of the Lamb Inn or Hotel in Ely) by special licence in 1786 and they proceeded to have three children, though only one survived infancy. Ann had a son, James by her previous marriage.

Robert had various official posts over the years, being Overseer of the poor, Surveyor of the Highways and sundry other roles.  Robert Seymour Genn with the aid of Reg Holmes found out a lot about this man, but was unaware of a letter that Robert wrote to a Colonel Yorke of a government department and which survives at the British Library (reference ADD MS 35669. It runs as follows
Sir
I hope you'll be kind enough to excuse the liberty I have taken in writing to you, but I would wish to inform you that Mr Pratt, the Postmaster of Ely is in a very bad state of health  at this time and is expected not likely to recover.  If it should happen that the Postmasters place should be vacant, I shall esteem it a very great favour if you would be kind enough to recommend me to the General Post Master.
I have taken the liberty of asking the Bishop [of Ely] for the favour of this recommendation I think it my Duty to inform you.
In hopes that you will not promise your interest to any other person, if solicited.  I understand several are making application, so [if] I should be lucky to succeed.[will] Endeavour to execute the Business with all the care and regularity I possibly can.
Your humble and Most Obedient Servant
Robert Genn, Ely, May 23rd [1788]
Thomas Pratt, Postmaster of Ely died in June, 1788
From 1788 to 1813 Robert Genn was the Ely Postmaster and owner of the Lamb Inn/Hotel for the greater part of that time, this being reputedly the best Inn in Ely.  We find the following advertisement:

Genn 's Post Coach from Ely to the King's Head, Bridge Street, Cambridge, three times a week viz:  Mondays, Wednesdays and Saturdays and returns the same day, and if required sets out in time for the London coach each morning. If not, at such times as shall be most agreeable to the passengers.  Inside 4 shillings, outside 2 shillings. Neat post chaises with able horses and careful drivers either by the week or the day”.

There were frequent cock-fights at the Inn, details survive, and in 1808 upon his retirement 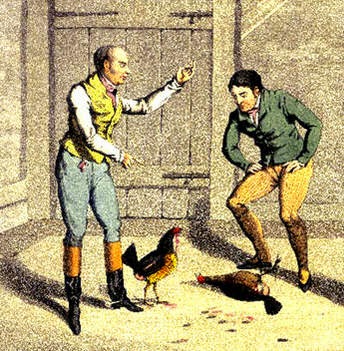 from the Inn an advertisement was placed in the Cambridge Chronicle, wherein Robert thanked his former patrons for their custom.

The Lamb as it is today

In 1815, Ely notables gave their support to a celebration dinner for the poor at the defeat of Napoleon at Waterloo and Robert was the patron and president of one table subscribing a guinea towards the cost of the dinner.

Robert and Ann had three children

Robert - two of the name died in infancy

For the notes above I am indebted to the late Robert Seymour Genn, a descendant of this family.  A more complete version is in his booklet at the Society of Genealogists in London.

Posted by Michael Taylor at 08:15 No comments:

This blog has been created to share information on the Ginn family of Hertfordshire and to discuss Ginn family history generally. Feel free to contribute and comment.

If anyone wishes further information or wants to contact me, please email m.tats@hotmail.co.uk